Since tomorrow is the National Day of Unplugging, we thought it only made sense to relaunch the “Thoughts of a Digital Alternative.” Here’s our advice: Use your phone today and “tell a friend.” If you still need assistance, download the unplugging kit: www.nationaldayofunplugging.com.

Believe it or not, I’ve never owned a cell phone. This sentence coming from a toddler might not be that astounding, but coming from a middle-aged woman who tremendously enjoys the company of friends, colleagues, and students, is rather surprising. Why wouldn’t anyone – with the exception of hermits and strict techno refuseniks – want to enjoy being and staying in touch all the time. Well, maybe it is exactly the “all the time” that I find disturbing. Of course, people tell me that you could just turn your phone off, that you don’t need to be online continuously, that it’s o.k. to be unavailable at times. And apparently, I’m not alone.

Phillip Reed, Associate Professor of Philosophy at Canisius College in Buffalo, New York State, certainly agrees with me. And for those of you who are not quite sure if you’d like to go cold turkey, you could join a tech-free day on the National Day of Unplugging planned for March 1-2, 2019. 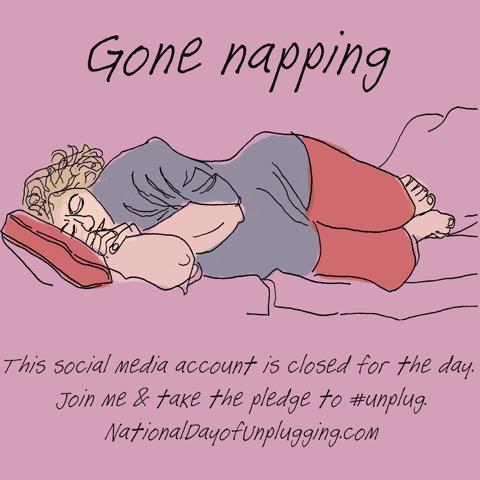 But you probably want to look before you leap, so let me just give you some food for thought. Here are a few comments I’ve heard: A colleague (teasingly, I think) once said she wouldn’t come on the study trip unless I get a cell phone; friends from my former high school insist I join their “Mädelstreff” WhatsApp in order to be informed about future trips, and my 91-year-old mom tells me it’s important to own a cell phone in case my car breaks down. All of these reasons are valid, of course, but maybe I should point out here that said colleague and I were on a study trip three years ago and everything went well; also, I’m one of two in our group of 13 former classmates who attended every single trip; and last but not least, I’m an eternal optimist and therefore think that a burst tire or some other mishap in the middle of the night happen to other people, but not me.

There’s really only one thing that worries me: I feel that my “digital Alternative” stance has become so much a part of my identity that buying a cell phone would seem like a betrayal to myself, like giving up an integral part of me.
But does not owning a cell phone really make me special?

P.S. I owe the “Alternative” in the title to Drew Hayden Taylor’s fabulous play, alterNatives.