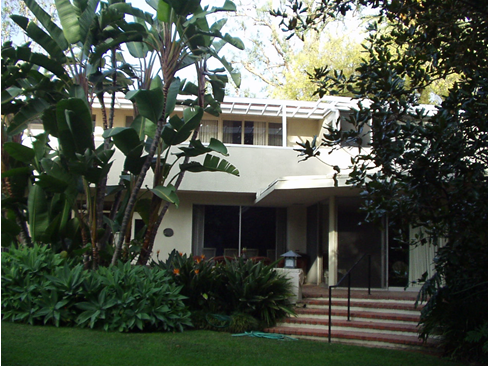 This almost Bauhaus-style villa, overlooking the Pacific Ocean, is located in beautiful Pacific Palisades, just off Sunset Blvd. In 2016, it went up for sale – for a measly $16,000,000. And the German government not only went right ahead and bought it, but also renovated it for another $4,000,000. Now why would Germany buy real estate in Los Angeles?

Having been a visiting professor at Princeton, N.J., Thomas Mann and his wife Katia moved into their California home on February 5, 1942, and stayed until 1952. Mann, who won the Nobel Prize for Literature in 1929, was part of a group of exiled German writers, artists, and intellectuals. In 1944, Thomas Mann became an American citizen, but after being charged with spreading communist propaganda by Senator Joseph McCarthy, Mann left the country. In 1952, the Manns settled in Zürich, Switzerland, where Thomas Mann died in 1955.

While residing at his home, Thomas Mann once commented about the architecture: “So now we live in a modern home. We like it anyway.” The architectural historian Thomas Hines called the place a “more gemütlich version of the international style” while the architect Julius Ralph Davidson called it “nostalgic German.” Mann’s villa was ‘the’ meeting place for German intellectuals, such as Theodor W. Adorno, Albert Einstein or Lion Feuchtwanger, who happened to live right around the corner at Villa Aurora. During his stay in Pacific Palisades, Mann – in addition to the last book of the Joseph trilogy and Doctor Faustus – also wrote radio programs for the BBC, attempting to mobilize Germans to fight the Nazi government.

Thomas Mann’s former home – now part of the German non-profit Villa Aurora & Thomas Mann Haus – will host a series of fellows who identify and address eminent contemporary issues. A conference entitled, “Struggle for Democracy,” was part of the official opening on June 19, 2018. During his welcome speech, German President Frank-Walter Steinmeier said that the house had provided “a home for so many Germans who fought for a better future for our country and for a more open society. It is in this spirit that we want to revive Thomas Mann’s villa.” The future fellows, Steinmeier continued, should fill “this house with a democratic spirit and with debates, capable of bridging the continents.”

Let’s hope that the house at 1550 San Remo Drive will truly be a place of open, enriching dialogue.