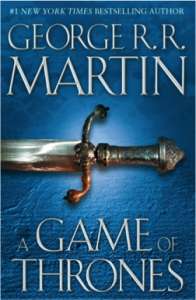 We all know him—the tall, strong, brave man. The hero. The prince. The knight in shining armor whose decisions are infallible, his visions wide-ranging, and his character traits impeccable. He is the good guy who faces the villain. George R. R. Martin introduces his readers to a new kind of hero: none of the above—at least not in the traditional sense.

A Game of Thrones (the first book of the series A Song of Ice and Fire) is about love and hate, loyalty and treason as well as high-born lords and servants. It is about a deeply troubled medieval kingdom on the edge of winter. It is also about good and evil, but the line between those two fades with every word that enters the reader’s mind and gets lost somewhere on the 807 pages. There are more names appearing in the book than anyone could possibly remember; yet none of the characters can be classified as entirely good or evil. No one is infallible. Not even—or especially not—the characters that we would most likely call heroes.

For a start, there is Tyrion Lannister. He is the son of a high-born lord: wealthy, arrogant, and maybe smarter than anyone else. But he is a short man. A dwarf. And thus, he is often humiliated. Jon Snow has a high-born father as well but was born a bastard. He is an outsider who does not know where he belongs, yet he has a good heart and is very loyal to his family. Daenerys Targaryen is the daughter of the last king, but she and her brother had to go into exile when the game of thrones began and their family was slaughtered. Since she is a fourteen-year-old girl, no one expects her to play an important role in everyone’s struggle to be the next on the Iron Throne. But young and ambitious women should never be underestimated.

The only character that can be called a ‘protagonist’ or even a ‘hero’ in the traditional sense is Lord Eddard Stark. He is the head of one of the great houses and an honorable man: strong, brave, and loyal to family and king. But when the king dies, and the game of thrones begins once more, his honor seals his fate. For he decides to support the true heir to the throne—who is not the king’s son. And the plot thickens…

George R. R. Martin takes his readers on a journey to reality—to the past, present and future of humans. In essence, it is not necessarily the strongest, bravest, or wealthiest person who is most influential.

Listen in on the following interview where the author talks about some historical facts that influenced his writing and the development of some of his characters.