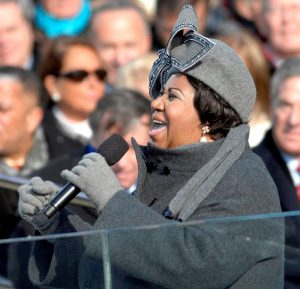 Powerful and proud, Aretha Franklin’s music championed the ideas of freedom and dignity, making her voice an integral part of the Civil Rights Movement in the United States with songs like “Respect” (1967) and “Think” (1968). When I hear the word “freedom” sung repeatedly in the chorus of “Think,” I’m reminded of Dr. Martin Luther King Jr.’s iconic “I Have a Dream” speech on the steps of the Lincoln Memorial in 1963, where he etched the words “Free At Last” into the vocabulary of the Civil Rights Movement. The song, “Respect”, unwaveringly and unapologetically demands just that and translates effortlessly into a voice for the feminist movement of the time. I was a child in that era, born in 1960, and the messages expressed by voices like Aretha Franklin’s have left an indelible imprint on me and many in my generation. Those voices made me feel that, as Martin Luther King put it, “the arc of the moral universe is long, but it bends towards justice.” They made me feel that the United States was a place of social progress despite its struggles.

That said it is with sadness that I write this piece in honor of the legend of soul, Aretha Franklin, who died on August 16 of this year. Yes, we mourn her loss as she was an icon of human resilience. However, there is another sadness that emerges from what I can only describe as dashed hopes and aspirations that relate to a false perception of social progress. In other words, I feel remorse when it seems that the battles fought and the grounds gained in the Civil Rights Era and the Women’s Movement were aberrations in the “arc of the moral universe.” I also fear that Aretha Franklin’s voice of strength and fortitude – that has resonated for decades – could become inaudible at one point. And last, I feel remorse that the country that I thought I knew has moved in a direction I never would have predicted. The irony doesn’t escape me that just today – as I write about an artist whose message speaks about strength and social progress – the United States Senate confirmed a Supreme Court justice whose influence could take the U.S. down a dangerously conservative path for decades to come.

Yet, as we turn our gaze back to Aretha Franklin, we see that not only her music but also her actions expressed the ideals of social justice and equality of her time. She contributed both her time and money to Martin Luther King’s efforts in the Civil Rights Movement. Her father, C. L. Franklin, was a civil rights activist and organizer as well as a King’s friend. Thus, the young Aretha Franklin had grown up surrounded by activism, and early on, a clause in her singing contract stated that she would never perform for a segregated audience. She was also a vocal advocate for women’s rights, and her words in a 2016 interview with Elle magazine echoed the sentiment of her 1967 hit song, “Respect”: “Women absolutely deserve respect. I think women and children and older people are the three least-respected groups in our society.” Finally, like the chorus of “freedom” in her 1968 song, Aretha Franklin demonstrated her dedication to the freedom of Blacks when she posted bail in 1970 for political activist Angela Davis who had been arrested on fabricated charges. Aretha Franklin told Jet magazine during that same year, “Angela Davis must go free. Black people will be free. […] I’m going to see her free if there is any justice in our courts, not because I believe in communism, but because she’s a Black woman and she wants freedom for Black people. I have the money; I got it from Black people – they’ve made me financially able to have it – and I want to use it in ways that will help our people.”

Voices like hers will be sorely missed – especially in times that seem to need her vision of equality and respect more than ever. The arc of the moral universe will continue to bend towards justice, except that it is perhaps a little longer than we thought.

Christine Jones is a musician and social activist in Los Angeles. She performs as a pianist and sings with “Voices of Reason,” the only atheist choir in the U.S. She is a vocal proponent for the separation between religion and government and serves on the board of Atheists United.