It goes without saying that the Germans’ unrivalled fascination with the Native people of North America is not exactly a well-kept secret. Case in point: the annual Karl May Festivals in Bad Segeberg and Elspe. But I’ve always wondered whether this fascination might be mutual. Spoiler alert: It is.

In 2017, Anishnawbe writer Drew Hayden Taylor set out in search of Winnetou. What he found ranged from the amusing to the unsettling. In other words, the perfect material for his documentary film, Searching for Winnetou, where the fine line between appropriation and appreciation becomes a bit blurred. Curious about the making of? Then click on our exclusive interview with the writer.

MH: Drew, thanks for taking the time to tell us a bit about your latest documentary.

DHT: My pleasure. It was such a delight to research and shoot. And the response has been overwhelming.

MH: So, where did it all begin? When did you become fascinated with Karl May and his Apache hero, Winnetou?

DHT: Well, at the time we shot the documentary, I had been to Germany about 16 times, lecturing on Native theatre, literature, culture and humor. And from the beginning, I was puzzled by this constant interest, especially with somebody like me who admittedly looks more German than Indigenous. Anyway, during every one of my visits, I kept coming across references to this character Winnetou and his author, Karl May. And I would meet other First Nations people who had been to Germany and told me they were frequently compared to Winnetou and then judged on their indigeneity. So it’s been an ongoing fascination. The more I would learn, the more interesting the topic would become. 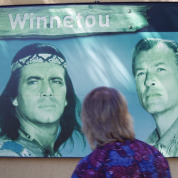 MH: When did you decide that you absolutely had to make this documentary? What was the driving force?

DHT: During one of my trips to Germany and the Czech Republic, I was touring with a play which featured and was directed by a good friend of mine, Kurt Spenrath. I casually told him about this unique fascination the Germans have. As luck would have it, Kurt also makes documentaries. Several years later, he – along with a producer buddy, Paul Kemp – managed to convince CBC (Canadian Broadcasting Corporation) to finance a documentary on the topic. I had always toyed with the idea of doing the documentary myself and had approached several producers over the years, but with little luck. So Kurt and Paul contacted me, I said yes, and the rest as they say is history.

MH: Can you tell us about an unexpected discovery, something new that you learned while researching the topic or during the interviewing/filming process?

DHT: We met this woman in Bavaria who makes teepees for the European market. Also, she is a pow wow dancer. She started out as a traditional dancer but saw a grass dancer and became fascinated by the style and beauty of the dance. She wanted to dance grass, but the problem is grass dancers are always male. Frustrated, she approached an elder (I don’t know if this elder was German or North American) about her dilemma. She was told she should dance how her heart tells her to. So she became a grass dancer which probably would never happen over here. The true irony of the situation is that she has been barred from participating in pow wows in Poland and the Czech Republic because of this. Evidently, they are stricter in those countries about their pow wow dancers.

MH: Were there any bizarre or surreal moments during the documentary-making process? Do tell.

DHT: I learned about a controversy at the Karl May Museum. It seems they are in possession of four actual scalps, and there is a legal battle about the repatriation of those scalps back to the Indigenous Nation they supposedly come from. But there is some question about whether they are actually Native or non-Native in origin. 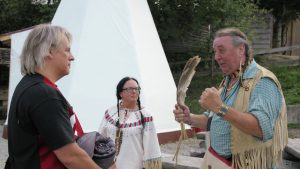 MH: Where one project ends, a new one begins. Will there be a Winnetou II in any way, shape, or form?

DHT: Not in that shape or form. I’ve had a producer express an interest in developing something about it but nothing really at this point. Of course, I always have hope The Berlin Blues will become cinematic in some way.

Curious about finding Winnetou now? Then feel free to watch the official trailer. Or if you happen to be in Lüneburg, Germany, on November 1, North American Studies at Leuphana University is hosting the German premiere of Searching for Winnetou at 6:15 p.m. in Auditorium 4 on the main campus. See you there?!