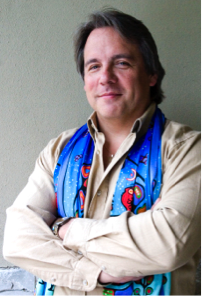 Drew Hayden Taylor is an award-winning Canadian Ojibway author of plays, short stories, novels, and critical essays. He has lectured worldwide on a variety of Native issues and earned the reputation of a true cultural mediator versed in confronting cultural misunderstandings, stereotypes, and prejudices – preferably with humor. Recently, I conducted a Skype interview with him that I’d like to refer to it as the “chat(ter) box interview” since it all began with some informal chatting and turned into a bona fide interview. Curious? Then read on.

South of the Border – A Matter of Perspective?

Maryann Henck: Hi, Drew. Thanks for meeting with me today on Skype. Are you ready for an interview for the American Studies Blog? I’m thinking of calling it “South of the Border – A Matter of Perspective?” What comes to mind when you hear that?

Drew Hayden Taylor: South of the Border… when I hear that term – based on cultural references I have come across coming primarily from America – it means Mexico. However, from a Canadian perspective, it means America for obvious geographical reasons – except for the city of Detroit, which is directly north of Windsor, Ontario.

MH: Point taken. Allow me to rephrase: With the exception of Detroit, the rest of the United States is clearly south of the Canadian border. Now what do you think I’d like to have your perspective on?

DHT: So you are asking for my perspective on Americans!? Okay. No problem.

MH: Exactly. Let’s start off with this question: As a Native person from Canada, what is your take on borders in general?

DHT: Well, traditionally – and that is a loaded term – we did not recognize borders. They are man-made creations, sort of a geo-political statement of where things begin and end. Often those borders are made by people who have nothing to do with that country (e.g. the dividing up of the Middle East and Africa after World War I), whereas Native people used natural formations to define borders like rivers, mountains, deserts, etc. Often they are completely arbitrary like longitude and latitude lines, e.g. the 49th parallel or the border dividing North and South Korea.

MH: In a nutshell, borders are artificial structures meant to separate people.

MH: So how do these borders affect Native relations above and below the 49th parallel?

DHT: They are hard to ignore since how Native people are today is reflected in a number of ways. For one thing, we still try to carry on with our traditions and ways of life, and many nations exist on both sides of the border: Ojibway, Iroquois, etc. However, in the two hundred and how ever many years the American Government has been interfering with its Indigenous people, the British and then Canadian Governments have at the same time been dealing with Native people differently – with different mandates and methods that have subtly changed the cultures. Going way back to the Pequot Wars in the early 1600s until fairly recently, the relationship between Natives and Americans has been one of aggression; yet there was much more interaction and co-dependence up here in Canada until basically the turn of the 19th/20th century. As all cultures and societies evolve, it can’t be helped that each community is slightly changed and affected by these centuries of different attitudes and histories.

MH: Since you’ve traveled to countless reserves and Native communities across North America, you must have noticed differences or perhaps even advantages or disadvantages on one side of the border or the other. Can you say something about this?

DHT: In many ways it’s apples and oranges. Up here in Canada we have a completely different relationship with the government and access to a lot more grants and services. In America, I sometimes got the impression that the government treats their Indigenous people almost like backward and impoverished children. Up here, we have our own national and political organizations, our own television network, many organizations and businesses that put us on a par with mainstream Canada. With that being said, there are still many problems in the approximately 630 Native communities across Canada: poverty, ill health, poor education, etc. My knowledge of the workings of tribal life in the States is very limited. In Canada, our Native communities run the gamut of poor to rich, with a strong middle class in the center. From what little I know, in America, other than casino communities, most are poor, but I could be wrong.

MH: So, in your view, there are some serious advantages to being Native on your side of the border?

DHT: I suppose so, but the grass is always greener… or redder on the other side of the fence. 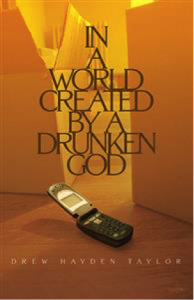 MH: Or the border, for that matter. Okay let’s take a look at your writings. My personal favorite is your chamber play, In a World Created by a Drunken God, the one in which Jason Pierce, a half-Native/half-white Canadian man, gets an unexpected visit from Harry Dieter, an all-too omniscient American businessman. Harry claims to be Jason’s half-brother and presents him with quite an unusual request. Not only do I find the moral dilemma of the play intriguing, but I also like your take on Canadian-American relations. Would you like to comment on that play?

DHT: Well, as you know, it sprang from a certain amount of my own personal wondering. I used the character of Jason to explore and heighten the sense of anti-Americanism that sometimes occurs up here. Yet I tried to show a sense of equality between them. I often view the story as a play about two brothers from the perspective of two single children, and the same can be said for Canadian-American relations. Both countries are on the same continent, descended from British origins, emancipated, and traveling down the same roads but in different vehicles.

MH: Yes, Jason is quite anti-American and likes to take jabs at Harry. Are the Americans so uninformed about their neighbors to the north?

MH: Thanks for taking the time for a little Skype interview. Maybe we can persuade you to be a guest blogger in the near future.