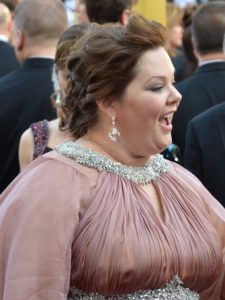 Ever since I saw her as Sookie St. James in Gilmore Girls (2000–2007), I’ve been a fan of the actress Melissa McCarthy. She was one of the few fat women on TV whose fatness was not a topic of conversation within the series’ universe or a motif to narrate the character’s storyline. (If you are surprised by my uninhibited use of the word “fat,” I suggest you google Fat Studies.) She was a chef, a wife, a mother, an important member of the Stars Hollow community, and ultimately, a best friend to protagonist Lorelei Gilmore. Although the “fat-sidekick” cliché clouded my love for the series, I accepted it as the price to pay for such an unconventional representation of fat femininity on television.

Only with the release of the comedy Bridesmaids (2011) did I realize McCarthy’s potential and talent as a comedian which has since then catapulted her into stardom. Annually released comedies (Identity Thief, The Heat, Tammy, Spy, The Boss, Ghostbusters) – ­some better than others – have put her on center stage. McCarthy is an incredibly physical comedian; she embodies her humor. In The Boss (2016), she is, for instance, shown being thrown against the wall by a damaged pull-out-bed, falling down the stairs, suffering temporary face paralysis after eating fugu, and falling off a building onto a pile of trash. These moments of severe injury and body violation are not funny per se, they rather surprise the audience and make them laugh at the unapologetic display of McCarthy’s fat, female body. And they turn her into an unrealistic cartoon character. Unfortunately, in the case of The Boss, these moments do not always make for good comedy (nor does partnering her up with Peter Dinklage; it is too obvious that we’re supposed to laugh at the grotesque imagery that is created when “extreme” body shapes meet and in this case, fight and kiss). In Paul Feig’s highly anticipated and controversially discussed remake of Ghostbusters – although partnered with three other talented female comedians – it is again McCarthy who offers her body for comedic purposes, as she is not only possessed by a ghost, but is once again shown defying gravity, apparently the funniest thing that can happen to a fat person. In one of the most memorable scenes of the movie, she is thrown around by a malfunctioning proton pack, the energy weapon the Ghostbusters use to weaken ghosts while her friends watch in fascination.

I admit, I am always conflicted when I watch McCarthy’s movies: How can I laugh about her being staged as an irrational, masculinized, hypersexual, non-empathetic character (Bridesmaids, The Heat) or a pitiful loner who is underestimated and betrayed by her male partners (Tammy, Spy) – obviously all effects of her fatness? How can I laugh at comedy that primarily shows the fat female body do supposedly unexpected things? (She can lift her leg! She can run! She can wear a sexy dress!) I believe in body positivity, in the need for positive images of all body shapes in the media, for the need to reclaim the word “fat” as an adjective, and in the misguided ideology of the “obesity epidemic” that is utilized to scare us into dieting. I know that fat people have historically been abused for cheap jokes whose purpose is to stigmatize fatness as undesirable, monstrous, and dangerous to society. Especially women’s fatness is understood as a failure to control the female body; therefore, stigmatization and public denouncement is seen as a method to control women’s bodies by shaming them into invisibility.

As I write this, I realize that this is why I laugh and I cherish McCarthy’s comedy – she is anything but ashamed or invisible. If you are hesitant in accepting my praise, watch Paul Feig’s Spy (2015). As unappreciated but highly competent CIA-analyst Susan Cooper, she manages to get into the field and uncover a black market ring for nuclear weapons. Her first aliases are quite revealing of the common imagery of fat women in America: Cooper is forced to mask as a Midwestern soccer mom or a crazy cat lady. This, so Cooper is promised, will render her invisible and enable her to investigate in secret. Invisibility doesn’t help her though; she finally solves the case by becoming visible, a process that starts with a stunning make-over scene, after which she draws attention in a sexy dress and befriends the boss of the operation, Rayna Boyanov. Copper does not display any insecurity about the dress, her body shape, or her abilities as an agent.

This movie convinced me that we need McCarthy’s presence on screen. She allows us to laugh, not only with her (the politically correct kind of laughter), but actually about her. We need to laugh about her in order to appreciate subversive moments like these. She has embraced her talent without considering how this might perpetuate fat shaming; she will not be shamed, instead she uses her body as a tool, just like all actresses and actors. Looking at other representations of fat women in comedy of the last decades – next to Nikki Blonsky’s outstanding performance in the remake of Hairspray (2007) – all I see are fat suits: John Travolta in the same Hairspray remake, Martin Lawrence in the Big Momma’s House movies (2000-2011), and Gwyneth Paltrow in Shallow Hal (2001). It seems as if fat is too precarious to show unless it is an illusion and presented in the “safe” space of a drag performance: “Don’t worry, these people are not really fat!” Watching McCarthy’s movies is anything but safe. Instead, we are forced to deal with the reality of fatness. It exists and always will just as other body shapes exist and always will. Fat women can be funny, but don’t have to. They can be likeable, but don’t have to be because, well, they are human beings.

Evangelia Kindinger is Assistant Professor for American Studies at Ruhr-Universität Bochum. Her academic interests include: popular culture (especially film and television), 19th century women’s writing, Fat Studies, Gender Studies, and the study of the American South. She is currently working on her second book, a study of the significance of the redneck stereotype in American culture.