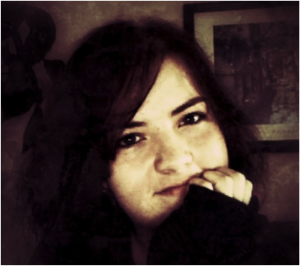 I wrote the short story “Lonely” in one of my university seminars. It was meant to be an assignment. Just an assignment. But my professor convinced me to enter the Daniil Pashkoff Prize for Creative Writing and submit my story. So I did. Even though my text didn’t win, I’m always grateful for new experiences, and for people believing in me.

“Lonely” is a story about a woman’s despair and obsession. She struggles with interpersonal relationships and tries to keep everything around her in perfect order. When her boyfriend doesn’t appear for dinner on Valentine’s Day, she starts to question his feelings…

Tick. Tick. Tick. The clock’s steady rhythm fills the air. It is dark. Only now and then, when a car drives by, a flash of light hits the room. Someone is sitting at the kitchen table, frozen. Everything seems to be prepared for a dinner, but the meal on both plates is cold and the candles already burnt down. In the middle of the table a lone vase is awaiting a bouquet of roses. Waiting. Still waiting.

It’s Valentine’s Day and Jim has promised to come. Maggie is expecting a proposal tonight. She’s even told Sue about it. But it’s nearly midnight now. Too late. It’ll be embarrassing to tell Sue. The neighbors will talk. Her parents won’t stop asking for a grandchild. Jim knows about these things. Why hasn’t he arrived? She even sent a note to remind him. Has he forgotten?

The motion detector in front of the house lights up, and Maggie jumps to her feet. She runs through the hall and hastily opens the door. She looks around, but sees nothing. Not even a cat. Just her dark, muddy front lawn. It is a rainy night like the one when she first met Jim. Holding out his umbrella, he smiled at her as they waited for the bus to arrive. It was just a faint smile, maybe just a twitch on his lips, but it is the one thing about Jim she likes to remember most. Otherwise, she would have to think about his strict outer appearance and his seemingly superior attitude. He likes to play tough. But she loves him nevertheless. Two weeks after their first encounter, they met again in a drugstore and he asked her out. Nearly six months have passed since then.

Maggie closes the door and goes back to the kitchen. Her hands are shaking and a sad smile crosses her face. She looks around, her eyes focusing on nothing, and suddenly she grabs the vase. An abominable noise – like a fork scraping on an empty plate – breaks the silence as the vase falls to the floor and bursts into hundreds of tiny, sharp pieces. A puzzle that can never be solved. Water covers the floor between the glass fragments, reflecting a kitchen where everything is in its place. Everything is in perfect order. At least it used to be.

It is not the first time for Jim to miss a romantic rendez-vous. One time, he and Maggie agreed on meeting for lunch, but he never showed up. She tried to call him, but supposedly he was in a meeting. He is always busy. Always working. Whenever Maggie sees him in his suit with the briefcase in his hand and that strict look on his face, he seems to be in a hurry. He is the one earning all the money and that’s why she never thinks about complaining. Maggie is an understanding person, she would never blame him for that. But now she feels like they have hardly seen each other lately. Maybe Jim doesn’t love her anymore.

Slowly, not noticing the glass fragments on the floor, Maggie starts to clean up. The food has to be wrapped up and stored in the fridge. The dishes need to be put back in the cupboard. Pots and pans have to soak. Perfect. Maggie’s fingers skim over the tabletop. The shaking has stopped. Everything looks presentable again. Except the vase. It’s broken. Maggie leaves it on the floor, switches off the light in the hall, and feels her way to the bathroom. With a sigh she closes the door, and soon the sound of running water can be heard.

Knock. Knock. Knock. Sue shuts her umbrella and wipes her feet on the doormat. It is still raining though Maggie’s front garden already looks like a moor. Something she will not be happy about. Too much dirt. But to be fair, this really is one hell of a morning. Sue knocks once more, curious about whether Jim really did propose to Maggie the day before. But nobody answers.

“Still in bed, huh?” Sue mumbles and searches her bag for the key. “I hope everyone’s dressed.”

She enters the house. Silence. The long hall looks exactly like it always does. Tidy, clean, presentable. Maggie’s bedroom on the left is empty, the sheets are in perfect order, and it doesn’t smell like someone recently slept there. But that’s not unusual. Next, Sue looks into the kitchen where she nearly steps on the broken pieces of a glass vase on the floor. This is something unusual. She also notices some watermarks and follows them to the bathroom. That’s where she finds Maggie. Lying in the bathtub. Not breathing. Without a heartbeat.

A few minutes later, the house is full of strangers. Police, paramedics… Sue is sitting on a kitchen chair, shocked and crying.

“Did she have any family?” a police officer asks.

“No. But she was going out with someone. Jim.”

“Do you know how to contact him?” he asks, scribbling something on his scratchpad.

“No. I’ve never met him. Just saw a picture once.”

Maggie’s death is declared a suicide. They said that she overdosed on her usual medication: some sleeping pills mixed with tranquilizers. Everyone calls her a wacko now though nobody had ever noticed something unusual about her before. Sue didn’t either.

Ring. Ring. Ring. A few months later, Sue leaps aside as a biker nearly knocks her over at the bus stop. She gasps resentfully. The man next to her noticed the incident, but doesn’t seem to be interested or shocked. He somehow seems familiar. He is wearing a suit, carrying a brief case, and has a rather unfriendly look on his face. This must be Jim. But Sue cannot be sure, can she? She hesitates.

“Yes. Do we know each other?” He doesn’t even look her in the eyes for longer than one short second.

He looks at his watch. “Maggie who? I don’t know what you’re talking about.”

“Maggie Wilder. You were going out, weren’t you?”

“No. We went on a date once but I haven’t seen her since. She was really strange, sending notes every day and calling my office. And now excuse me, I’ve got work to do.”

He steps onto the bus and vanishes. As Sue gazes at him, her eyes begin welling up with tears again.

“Oh Maggie,” she sighs. “You must have been so lonely, so very lonely.”