By Maria Moss and Sabrina Völz 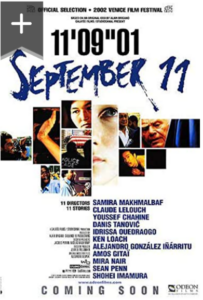 September 11, 2021, marks the 20th anniversary of the most horrendous terrorist attack on American soil. In a series of four coordinated attacks on the World Trade Center’s north and south towers, the west side of the Pentagon, and United Airlines flight 93 that crashed near Shanksville, PA, almost 3,000 people lost their lives.

11’09”01: September 11 provides one of the first cinematic responses to the attacks as well as to terrorism around the world. In films lasting exactly 11 minutes, 9 seconds, and 1 frame, 11 acclaimed filmmakers from 11 different countries and cultures provide us with not only deeply touching, but also provocative and disturbing moments.