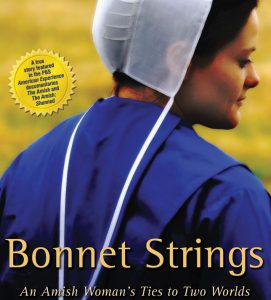 In the second half of the interview, we turn our attention to Saloma Miller Furlong’s Bonnet Strings: An Amish Woman’s Ties to Two World (2014), the succeeding installment to her ex-Amish memoir Why I Left the Amish (2011). Both books depict and reflect on the struggles to put the past behind and embrace an unknown future. In Bonnet Strings, however, before being able to seize the chance to find true happiness and love in the world beyond the Amish, Furlong feels compelled to return to her former community after coming face-to-face with a vanload of relatives and Amish community members in Vermont. Once in her old surroundings, she tries yet again to “wear Amish” and reconcile her rebellious nature with the Amish mindset.

In contrast to the autobiography and its ‘one shot’ at a self-referential non-fictional narrative, serial memoir affords the writer the opportunity to revisit some of the same memories or reflections discussed in an early work from a later perspective or experience. Bonnet Strings opens with just such commentary.

SV: In the introduction to Bonnet Strings, you share your realization that you “could have been kinder to her [your sister Sarah] and others in Why I Left the Amish” (15). You also tell your readers that you have changed some characters’ names in your new book to protect their privacy which – I am assuming – you did not do in Why I Le ft the Amish. These statements express a healthy and self-critical reflection on your own writing. Having become a more experienced writer and having listened to the questions and comments of hundreds of people at your various talks and readings, is there anything else in retrospect that you would have changed about your first memoir in light of what you know now?

SMF: My motivation for how I went about writing Bonnet Strings was very different than Why I Left the Amish. I just described my need to have my story told last week. Part of what ‘I know now’ comes from ‘telling all’ in Why I Left the Amish. If it were possible to go back and apply what I learned from that experience to improve the book, I would have changed some of the names, been more sensitive in writing the ‘profiles’ of each of my family members, and improved the structure of the story, either by eliminating the transitions between past and present or writing them more effectively.

When I was writing Bonnet Strings, I had the benefit of having learned from publishing my first book. My readers had been clamoring to know how I adapted to my new world in Vermont and to generally know more of my story. I was no longer writing about the ‘stuck’ place of my childhood when I could not yet advocate for myself, but now I was writing about that time in my young adulthood when I was learning the feeling of empowerment as a result of making my own decisions. I was also telling of that time when I was discovering what it was like to love someone and to have the desire to spend my life with him. In other words, the hard work was done in my first book, opening the opportunity to tell of that time in my life when I was discovering my ‘self’ and choosing my life path.

SV: In Bonnet Strings, you are quite open about your struggle with bulimia and your concern about gaining much weight after stopping the purging but continuing to binge. Luckily, you got some counseling. How were you finally able to overcome this eating disorder?

SMF: When I left the Amish the second time, I was still struggling with bulimia. As I adjusted to the freedom I was rediscovering, that awful addiction began to lose its grip. As David and I made plans for our wedding, I made a pact with myself that I would never again purge after our wedding day. I had been tapering off in the months and weeks leading up to that day, so I was able to keep that pact. By then I was no longer binging as much, so I did not gain a lot of weight. After giving birth to my two sons, my metabolism seemed to change, and I lost the struggle against weight gain.

The issue of body image is ongoing. I have to realize that some of what I struggle with is genetic. I come from farm stock. All but a few women and men on Mem’s side of the family deal with this struggle in one way or another. My cousin, Martha, who is one of the few who does not have to deal with weight issues, tells a great story of how she walked into my mother’s living room one day when our aunts were visiting. She said that they were all spilling out of their hickory rockers and chairs when one of them looked up at Martha and said, “How do you stay so thin?” Then one of them remarked that she would like to lose weight, but she wouldn’t want to be that thin. One after the other, the aunts joined in and said they wouldn’t want to be that thin either. Mem was quiet until they had all given their opinion, and then she wistfully said, “Well, I would.”

SV: Considering your lengthy discussion of gender roles, sexual abuse, eating disorders, body size and so on in your memoirs, would you consider yourself a feminist?

SMF: I don’t know if I would characterize myself as a feminist, nor do I know if my friends would. I am certainly grateful for the personal freedom I gained when I left the Amish and began making my own decisions. However, I may have felt the same way had I been a man coming out of that culture. Certainly, the men among the Amish enjoy more freedom than the women do, but they also carry more responsibilities for the family and for the community. I realized this in a new way when I read Ira Wagler’s book, Growing up Amish.

I am an advocate for people in general to feel empowered to choose their path in life. If someone wants to label me a feminist for these sentiments, then be my guest.

SV: The hardest scene for most readers to understand is probably the one in Bonnet Strings in which a vanload of people – including your Amish community’s bishop, brother, and a close friend – come to pick you up in Vermont for the second time. And you go with them willingly without putting up any real struggle. You mention the immense pressure tactics used by the Amish to force people into submission as well as the fear of you being physically forced by your brother into the van, but could you also have been – on some unconscious level – running away from the ‘Yankee’ world, knowing that you were somehow caught between a relationship with two men and feeling smothered by David, your future husband?

SMF: “And you go with them willingly without putting up any real struggle.” I would correct this sentence to read “without putting up any external struggle.” The internal struggle was epic and very real. Part of me wanted to get up in the middle of the night and run as far away as I could, just to get relief from that long, dark night of my soul. It’s true that I was already feeling torn between my original community and my freedom in Vermont before that vanload of Amish people arrived, but once they arrived on my doorstep, any opportunity to make this decision of my own accord had vanished.

The unconscious level of our minds is a mysterious thing, but I can say on a conscious level, I would have chosen my struggle of being caught between two men in Vermont far and above that of the one I was suddenly confronted with. Perhaps if David and I had parted on good terms that night, I would have called him for help. In this way, the tension between us might have entered into my decision to go back.

This struggle was the same one I faced, except in reverse, when David arrived at the reservoir that Saturday afternoon some months later. I am so glad these struggles are behind me and that I survived them!

SV: After having written two serial memoirs, will you write a third? If so, can you give us a hint about what the topic will be? If not, have you considered writing fiction?

SMF: I have several book ideas. I believe I have one more memoir in me, which will focus on my relationship with my mother. And I also have an idea for writing an historical novel based on a family in my ancestral background that emigrated from Switzerland. And finally, I hope to conduct research of former Amish people that focuses on their education and occupation. I hope to write a book about the findings of this research.

SV: Well, it sounds as if you are definitely going places. Thank you for your time and wonderful insights.