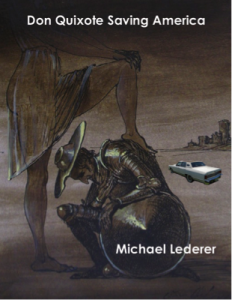 You know what tribe I belong to? Put your hand on a table. Now hit it with a rock. If it hurts, then you and I belong to the same tribe. The Hit-my-hand-with-a-rock-and-it-hurts tribe.

Wanting to believe a thing is the first and biggest step. From that to believing is as easy as landing in the water after you’ve already jumped.

I want to believe, and therefore I do believe, that – as politicians like to tell us – America’s best days are ahead. Romanticized periods of our past – the Old West, the 1950s – still saw whole swaths of Americans denied their shot at the dream. Liberty for some! But in this still-dawn of a new millennium we have the chance, as Oprah put it, to “turn our wounds into wisdom.”

I’ll admit such optimism is not always easy to maintain. One peek at the day’s news is enough to send many optimists scurrying over to the other side. Vast legions of Darth Vaders have crossed the bridge. One cynical character in my first novel, Cadaqués, says, “Beauty is yesteryear, darling. Get over it!” I love the character, though I don’t agree with him. Which is why in my new novel, Don Quixote Saving America (not yet published), another character, Don Hotey, and handsome young hitchhiker Sancho set out in a beat-up old car to “fix what’s broken.” America is their Dulcinea. “We love her,” says Don. “We dream about her. We want the best for her. And I guess we’d do just about anything for her.”

The America he’s talking about, however, is not the one reflected in the daily news: Ferguson, Sandy Hook, Washington D.C. He’s talking about that stubborn old dream of a multiculti Mayberry. “Neighbors helping neighbors, everyone saying please and thank you, and no fart jokes. Not like the country they show in all those movies where they tell you how messed up everything is, then even get you to laugh at it.”

Like the hero in Cervantes’ masterpiece (400 years old this year), my Don believes in dreams coming true. As they drive through the Nevada desert he explains: “This country is still young, Sancho. It’s got a lot to learn still. Why, do you realize I was born in 1946? That was before Facebook, before Starbucks, before a lot of things. On the day I was born there had to be at least a handful of people a hundred years old, which means they were born in 1846. And somebody a hundred years old on the day they were born, well then they were born in 1746. That was before this country even got started. That’s just three lifetimes to get all the way from there to here.”

A free-range chicken or tofu in every pot, clean sustainable energy, liberty and opportunity for all… Don believes we’ll get there. And I want to believe he’s right.

Michael Lederer is an American writer who lives in Berlin, Dubrovnik, and Cadaqués. His first novel, Cadaqués, was published in February 2014. He has just written his second novel, Don Quixote Saving America.