As far as I can tell, history has a bit of an image problem among future English teachers. It does not seem to be one of those topics that receives much attention in English classrooms across Germany. I mean, really, who is interested in a bunch of dead people, dates, battles, and maps? Well, to be honest, I’m not and probably you aren’t either. But luckily for us, history is much more than a collection of dull facts and artifacts. History is about people, places, and events. It is about greed, passion, power, leadership, and betrayal. It is about achieving success and admitting failure as well as making good and bad decisions. In essence, it is about life. In fact, I am so bold as to suggest that history can be as fascinating as any good novel. In Joyce Carol Oates’ masterful short story, “Death Watch,” the narrator writes: “Truth must be marketed like any other product.”[1] Okay, so let’s market history.

There are many reasons to study history; in fact, without some general knowledge of the past, it is nearly impossible to understand life today. This semester, I am teaching a course entitled, “The United States in the 21st Century.” Apart from reading scholarly texts and analyzing primary literature as well as film, I’ve added to my syllabus a collection of pictures and short two-to-three minute film clips produced by the History Channel. Today’s YouTube generation tends to read less; we all know that. So let’s meet our students halfway. These visual images will help set the context for my class discussion on the legacy of slavery, which also includes analyzing Steve McQueen’s award-winning film, Twelve Years a Slave. The History Channel’s short video clips cover numerous subjects, ranging from the origins of slavery, the Underground Railroad, and Harriet Tubman to the fifteenth amendment. I particularly appreciate Kerry Washington’s performance of Sojourner Truth’s speech, “Ain’t I a Woman.” She literally makes history come alive, which brings me to my second point.

Dramatic readings and role plays are making their way into the university classroom. As part of Stanford Professor Claybourne Carson’s free online African American history seminar on Academic Earth, he invited Awele Makeba to give a lecture. Makeba weaves short performances of incidents in Rosa Parks’ life into her lecture based on court records. Makeba is amazing. Amazing with a capital A. Until I saw her performance as Rosa Parks, I was skeptical. Isn’t such a performance dumbing down academia? Role plays—aren’t they for elementary school? Really? At the university? You’ve got to be kidding. No, I am not.

A few years ago, I decided that if history reenactments are good enough for a top university such as Stanford, then they certainly would be good enough for my university. Since then, future teachers and students in my general education classes on American history have, from time to time, had the choice to give a traditional presentation or stage a role play based on historical documents. A number of students have used letters, memoirs, documentaries, and general historical texts as a basis for their performances. Role plays not only provide a change of pace from the sea of PowerPoint presentations, they initiate deep learning and foster empathy. It’s a win-win situation for everyone. So why not give American history a try? 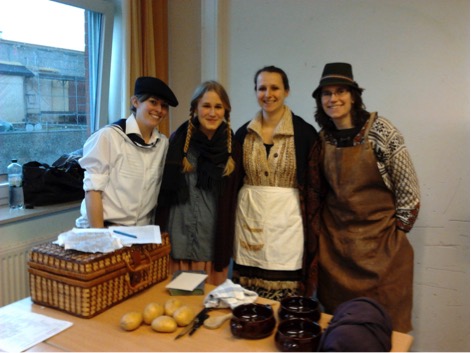 Leuphana students preparing for their role play on German immigration to the United States at a local Lüneburg Gymnasium.