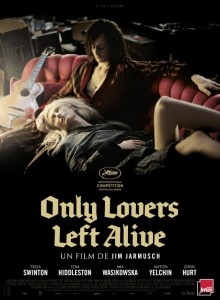 After a three-year respite, iconic independent filmmaker Jim Jarmusch is back with a quietly intriguing new film: Only Lovers Left Alive – a tale of two lovers and of two cities. Although lovers Adam and Eve (Tom Hiddleston and Tilda Swinton) – not the biblical couple but nevertheless, a couple in the biblical sense – live in cities continents apart, they have been together forever. Literally forever since both of them happen to be vampires.

Yet, they’re not the type of vampires you might be expecting for they have little in common with either the shape-shifting, black-caped Dracula types or the momentarily in vogue vampires from the likes of Twilight, The Vampire Diaries, and True Blood. This is, after all, the quirky cinematic world according to Jarmusch who is known for his refusal to cater to any one specific audience. His primary objective is to make films that “tell stories, but somehow in a new way, not in a predictable form, not in the usual manipulative way.”

Consequently, the unexpected is to be expected. So perhaps it would be most fitting to continue with a tiny spoiler alert: Only Lovers Left Alive is not a ‘real’ vampire movie or a horror story for that matter; it’s truly a love story, but not of the sweet and sappy persuasion: this one has teeth. As physical and intellectual eternal wanderers of this world, Jarmusch’s vampires can freely reminisce about the past, live in the present, and ponder the future. Of course, there’s a catch: Eternity can be both a curse and a blessing – especially when that sense of wanderlust begins to fade and weltschmerz sets in.

The opening scene zeros in on Adam – a reclusive, melancholy musician who lives amidst a chaotic array of vintage musical instruments and old-school recording equipment in a dilapidated, Gothic tower on the outskirts of Detroit. The place once known as the Motor City has been relegated to a ghost town: dark, dreary, and dead with the exception of a still thriving music scene. Adam’s only real contact to humans is Ian (Anton Yelchin), a “rock-and-roll kid” and trusted dealer for all things musical. But this time around, Adam has a non-musical request for Ian: He needs a wooden bullet to put an end to his increasingly depressing existence. Back in the golden days, he played chess with Byron and gave an adagio to Schubert. These days, there’s nothing left for him to do except watch the ‘zombies’ – his pet name for humans – destroy themselves and the planet. In Adam’s view, nothing is sacred to or safe from those brainless creatures: water, blood, and love – the very essences of life have been rendered impure.

Meanwhile on another continent, Eve haunts the golden-lit alleyways of Tangier as she sets out to visit her good friend, playwright Christopher Marlowe (John Hurt), who also happens to be her dealer for “the good stuff” – uncontaminated blood in a bag, preferably type O negative. In this world, pure blood has become as rare a commodity as pure love.

Adam and Eve no longer engage in the traditional neck-biting approach to quenching their thirst for blood; this is, after all, the 21st century, and they are vampires of a more genteel nature. While Adam broods over his musical compositions and contemplates suicide in far-off Detroit, literature addict Eve gorges on books in every imaginable language and indulges in her unwavering lust for life. Although these lovers live at opposite ends of the globe, they seem to be telepathically aware of each other’s feelings – so aware, in fact, that Eve senses Adam’s suicidal intentions. Entanglement – Einstein’s spooky action at a distance – is at work. After booking a series of night flights and finally deciding which books to pack, Eve heads off to reunite with Adam, hoping to reignite his sense of enchantment about the world as well as whet his appetite for eternal life again.

Adam and Eve’s blissful reunion in Detroit leads to endless lazy nights filled with delicious delights: dancing, lovemaking, playing chess, and enjoying treats like frozen “blood on a stick.” All is quiet on the Detroit front until imminent evil enters the scene in the form of Eve’s bratty baby sister, Ava (Mia Wasikowska), who, according to Adam, obviously smelled “the good stuff” all the way from the “zombie central,” L.A. Instead of being a good vampire girl who stays put in her coffin, party-vamp Ava lets out her inner wild child as she proceeds to systematically wreak havoc on the lovers’ peaceful existence.

Only Lovers Left Alive will captivate audiences with its charmingly hip vampire couple as well as its atmospheric interplay of dark and light in nocturnally romantic Detroit and Tangier, set to an eclectic soundtrack courtesy of Jarmusch’s band SQÜRL, Jozef van Wissem, White Hills, and Yasmine Hamdan. Destined to become a midnight movie classic, this cinematic gem invites you to take an unforgettable stroll down eternal lovers’ lane.