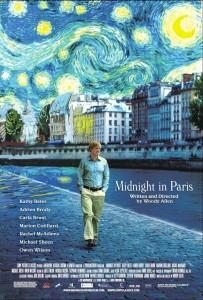 Gil Pender (Owen Wilson) is a successful Hollywood screenwriter, lives in Beverly Hills, and has a beautiful fiancée, Inez (Rachel McAdams). And yet, life feels a little unsatisfying to him because he wants to be a novelist and feels deep down that “we both like pita-bread” may not be the best basis for a marriage. While vacationing in Paris with his wife-to-be and her posh, conservative, and business-oriented parents, Gil realizes that he longs for someplace else and very literally sometime else: Paris in the 1920s! Palpably at odds with his present time and company, Gil seeks solitude one night in the streets of his beloved city. When the bells of Notre Dame strike midnight, an old-fashioned limousine suddenly appears out of nowhere, and a bunch of good-humored people invite him on a trip beyond his wildest imagination.

Midnight in Paris (2011) was written and directed by Woody Allen, who received an Academy Award for the script in 2012. Although the movie’s officially referred to as a “romantic comedy,” that classification feels slightly off-target. It is romantic and comical, but also melancholic and thought-inspiring. The lead character Gil constantly and convincingly oozes with longing, nostalgia, and a deep sense of belonging somewhere/-when else, and Owen Wilson proves that his talents extend far beyond his usual silly comedy roles. The cast is marvelous across the board, and the numerous literary as well as artistic celebrities Gil meets on his magical trip – Ernest Hemingway (Corey Stoll), Gertrude Stein (Kathy Bates), and Salvador Dalí (Adrien Brody) to name only a few – are superbly portrayed. However, it is not necessary to know much about these legendary people, the era, or the city to enjoy the film. Woody Allen succeeds in crafting a script that contains many intertextual references, but at the same time works on its own. He also captures a special atmosphere: the music, the scenery, and last but certainly not least – the colors! Midnight in Paris is a mellow-yellow movie, which not only contributes to its feel-good effect but also ties in nicely with the overall theme of nostalgia and longing. A movie for mind and heart!