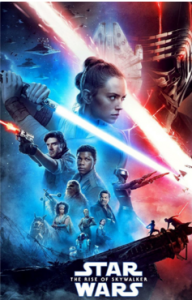 A year has passed since the events of The Last Jedi (2017). Kylo Ren (Adam Driver) is Supreme Leader of the evil galactic regime called The First Order and still strangely drawn and connected to his enemy, the last Jedi and resistance fighter Rey (Daisy Ridley). But not everything is as it seems, and we soon realize who’s been pulling the strings all along.

The Rise of Skywalker doesn’t spend much time on an introduction, so I won’t either. The movie lasts 142 minutes and goes by in a heartbeat as the characters rush from one visually impressive quest to another. They meet new characters along the way, some known from the original trilogy, others completely new to the cast. Also, we get lots of typical Star Wars moments, some oozing with nostalgia. Too often, the makers of Star Wars randomly cram iconic objects or characters onto the screen, obviously counting on the extreme devotion fans have for the original trilogy. Done with tact and instinct – done in the Jedi way, that is – this could be powerful. But I’m afraid they (over-)did it.

Unfortunately, many plotlines feel just as crammed. Our band of heroes spends the first half of the film quite literally planet-hopping for one McGuffin after another. The pacing of this movie is insane – sometimes it feels like two or three movies in one. What a shame! But no time for that, move along, move along! Although The Rise of Skywalker is never boring and definitely fun on a superficial (and visual) level, the over-the-top action feels strangely void and generic. Also, the rollercoaster speed of this film prevents viewers from dwelling on scenes or pondering actions.

After revisiting the film in my mind, I noticed some plot holes, out-of-character actions, and events that simply made little to no sense. Granted, no one expects a slow and calm character study in a Star Wars movie. After all, the films of this forty-something year-old franchise are known and cherished for being flashy space adventures that go well with a bag of popcorn. However, the original trilogy never resorts to a mindless ‘the more, the better’ formula, but actually makes the audience think and feel. The actors mostly do a fair job and have potential. But that’s the tragedy: After following the characters for three movies and roughly seven hours, I wish the movie makers had cut pointless plotlines, reduced the action, and left more space for story and characters to develop organically. Take, for instance, Emperor Palpatine (Ian McDiarmid).

“The dead speak!” are the film’s opening words. Well, this doesn’t come as a surprise since movie posters and trailers already revealed that the Emperor, who we thought had died in the finale of the original Star Wars trilogy, would be back in this movie. While it was certainly special to see McDiarmid as the iconically evil and manipulative villain again, the choice to bring him back against all logic and reason and without necessity or proper explanation smacks of creative despair.

Making a Star Wars movie must be awesome to stellar proportions, but all that aside, I don’t envy anyone involved in the creation of a new chapter of the saga. The fans aren’t your typical audience either, but more like co-owners and co-creators of the franchise. Not few of them have grown up with it, and there’s no limit to the level of knowledge some fans have gathered from all corners of the Star Wars universe; some translate that into fan-fiction, and a lucky few of those have even become official Star Wars authors, publishing canonical Star Wars novels. Well, my hardcore-fan-level is probably lower than that of those people, but I am a Star Wars fan, no question about it. Thanks to the sequel trilogy, I know the feeling of hoping the makers of a new episode will get it right and return that story unharmed. The pressure is high, and it must’ve been immense for this final chapter of the trilogy. As if that wasn’t enough, two years ago the previous episode, The Last Jedi, tore the audience asunder; the moment of the iconic Skywalker lightsaber hilt breaking into two parts seems oddly symbolic for that movie now. Well, from the very start of The Rise of Skywalker, that same lightsaber hilt is back in one piece again. And it’s obvious that this movie’s main objective was to fix something that was already broken. Well, it didn’t quite accomplish that.