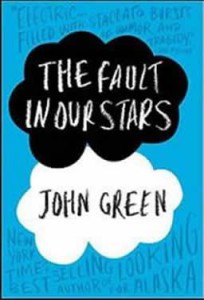 Hazel Grace Lancester will never be a normal teenager. She doesn’t know that people don’t do pot but smoke it, or what it feels like to party the night away at a club with a fake ID. There is a swing set in her garden that hasn’t been used in years. Hazel was diagnosed with terminal thyroid cancer that eventually metastasized to her lungs when she was thirteen. Her reality consists of constantly carrying an oxygen tank, routine check-ups at the hospital, watching reality shows, and going to her support group. While, at first, support group sounds like the least enjoyable activity, Hazel soon meets Augustus Waters, who has lost his leg to osteosarcoma but is “on a rollercoaster that only goes up.” They connect, they talk – talk a lot, about their dreams and fears, about books and oblivion – and fall in love gradually but nonetheless intensively.

The Fault in Our Stars is the widely acclaimed sixth novel by contemporary author for young adults, John Green. First published in January 2012, the novel has now been turned into a motion picture. Hilariously funny yet deeply touching, Green introduces the reader to the world of a sixteen-year-old cancer patient without turning it into a typical melodramatic cancer story. An interplay of wit and thought-provoking lines lets readers connect to the main protagonists, making them smile, laugh, and cry – almost simultaneously. 316 pages later, we are emotionally cut open but left with the beautiful realization that some infinities are indeed bigger than others.