Let’s start off with a few telling facts: The origin of the word “racism” stems from the French word racisme which appeared during the last decades of the 19th century. In English, however, according to the Merriam Webster Dictionary, “Racism appears to be a word of recent origin, with no citations currently known that would suggest the word was in use prior to the early 20th century.” Now, let that sink in. The people at Webster are also quick to point out that just because the word is “fairly new” doesn’t mean that “the concept of racism did not exist in the distant past.” No wonder we – and with we, I mean all societies – have a problem with racism. So let’s get to the root of it and root it out.

One of the courses I regularly teach that I wish wasn’t so relevant these days is called, “The Sixties in Fact and Fiction.” As an American Studies scholar, I’d like to think that society can learn the lessons of the past, so I keep teaching and keep teaching about the long 1960s. Yet, it seems that society has been left untouched by those lessons we should have learned some time ago. It is sad to say, but racism, inequality, police brutality, and injustice are still alive and well in the United States. However, many of the people who have been their victims are not.

It is paramount that we delve more deeply into racism, a topic that literally affects the lives of millions of people. And I suggest we bring back the 60s-style teach-ins at all levels of society – from elementary school to post-graduate seminars, from public libraries to churches, and from police precincts to city halls. The more people who truly understand the history, meaning, and effects of racism, the greater the chances are that profound change can finally come. For white people like myself, however, that knowledge is likely not just uncomfortable, but also full of guilt and pain.

For white adults, I’d start the anti-racism journey with an episode from the podcast Dear Sugar Radio by Cheryl Strayed and Steve Almond, entitled “Talking About Privilege” with Catrice M. Jackson, republished on Jan. 10, 2020. Then, I’d move on to the collection of seemingly endless resources on anti-racism geared to all ages, backgrounds, and levels of knowledge by Dr. Nicole A. Cooke, Augusta Baker Endowed Chair and Associate Professor at The University of South Carolina. 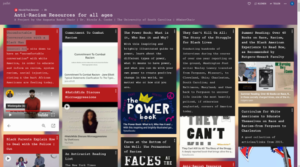 As you can see from the image above, the references have been attractively compiled in Padlet, and many of them can be used for remote learning. Here, readers will find plentiful suggestions that make wonderful additions to any library, such as the children’s story, The Power Book: What is it, Who Has it and Why? by Claire Saunders et al. or The New York Times bestselling work of non-fiction for adults, So You Want to Talk About Race by Ijeoma Oluo. Also, everyone should do The Implicit Association Test – the results may surprise you. Then, there are the links to articles, such as “Why You Need to Stop Saying ‘All Lives Matter,’” and videos, for instance, “Uncomfortable Conversations with a Black Man,” in which Emmanuel Acho has a heart-to-heart with white America. These resources will keep the open-minded busy for hours and hopefully help readers to engage with the complex topics on both an intellectual and emotional level. My hope is that this knowledge will empower us to make a difference. Thank you, Nicole Cook.

For those, who’d like a more structured approach, I’d highly recommend the National Museum of African American History and Culture’s “Talking About Race” Web Portal. It includes sections on anti-racism, bias, community building, the historical foundations of race, systems of oppression, and whiteness. Each section builds on the next with relatively concise entries supplemented with pictures, charts, videos, and much, much more.

Let’s turn those feelings of confusion, helplessness, or even rage into deep learning. And let’s move the dialogue from racism to anti-racism.