By Sabrina Völz and Jennifer Kühl

As we all know, more and more adults are reading less and less in their free time. That’s not a judgment, just a fact. Budding bookworms might even be considered an endangered species, so a few years ago, I started looking for a different approach to teaching literature to students of all majors and backgrounds. While looking for inspiration, I came across the literature circle, an approach that might just engage even the most skeptical university student who’d rather be writing code for an app or starting his or her own business. While it has become an integral part of the English classroom from elementary school upwards in the United States, this student-centered activity is relatively unknown in Germany. At least it was to me. During my research, I found out that literature circles come in all shapes and sizes and can be structured in many different ways, so there’s no one “right” way of doing it. That very fact appealed to me and led me to explore unchartered territory.

In a nutshell, a literature circle is made up of a small group of individuals who read the same text. Together they explore the text’s content and style while reflecting, asking questions, and sharing feelings, just as any literature circle would do. Sounds simple, right? It is and that’s exactly the point. When I first started adapting the literature circle to fit my university’s curriculum, I didn’t realize how this method would revolutionize my classroom – at least for a day.

After getting everyone psyched for the literature circle, students receive role sheets and choose their respective role (Discussion Director, Illuminator, Illustrator, Connector, and Word Watcher). I omit the summarizer role at the university level and often replace it with a researcher, who looks into the author’s style of writing. In a high school setting, a book would be split up into several sections and the roles would change over the course of a learning block. However, due to my university’s 14-week semester, in which the seminars I teach meet only once a week, I dedicate only one lesson to the literature circle that usually covers a fairly accessible novel or an engaging short story. Students are encouraged to adapt their role to suit their own purposes and to break out of their comfort zone by trying a role that they would not usually be drawn to. Therefore, I try and encourage shy or more introverted students to take on the role of discussion director.

The illustrator role is sometimes a challenge to fill. If the artists are few and far between, I encourage students to make use of pictures gathered from magazines and google images or try their hand at modern art or stick people. A few semesters ago, one student made a wonderful collage with images of Canadian cultural references employed in Drew Hayden Taylor’s play, God and the Indian. Other students show their hidden talents or unleash their creativity as Jennifer Kühl did, currently a graduate student majoring in Teacher Training for Vocational Schools at Leuphana. Her illustration below was inspired by a quote from Tim O’Brien’s The Things They Carried:  “I survived, but it’s not a happy ending.” As Jennifer has explained, “Vietnam War memories can be viewed as an intense itching that will never stop, like wounds that will never heal.” 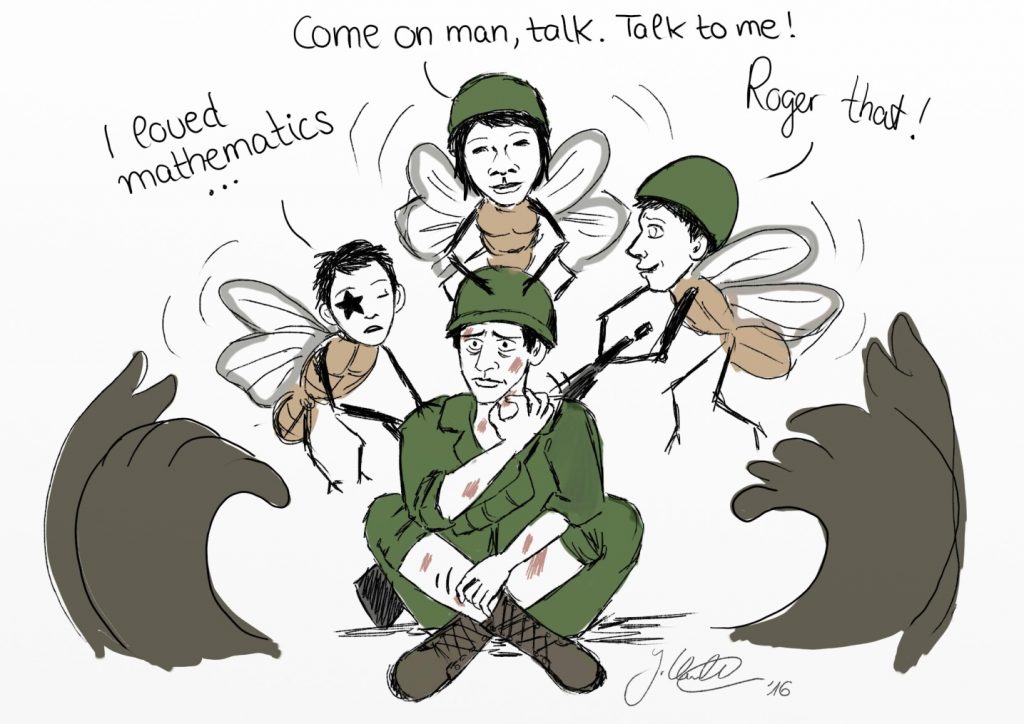 As a post-discussion activity, students can write essays, reaction papers, or share an insight or two with the rest of the class. In all honesty, the literature circle has never let me down. It’s a win-win situation for students and instructors alike. It definitely provides a change of pace from the routine of academia, and everyone is included. Students are put in charge of their own learning and can greatly influence the direction the discussion takes. In other words, they actively create their own meaning and hone their critical thinking skills in a cooperative learning environment. Knowning that everyone depends on them, students often do their best work. Apart from the usual tasks suggested by the word watcher role, for example, I’ve seen students make lively word splashes, organize vocabulary thematically, or make a word cloud.

As mentioned above, students can – if they so choose – expand their horizons by taking on a role that they might not normally select if their grade depended on it. And finally, they will likely have a meaningful discussion that is remembered for sometime to come. So yes, I truly believe that literature circles rock. But don’t just take my word for it, try it for yourself.