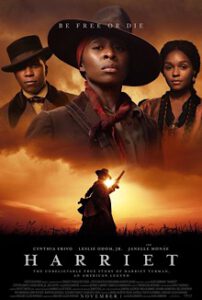 It’s not easy to make a biopic that pleases the critics. And, to some extent, Harriet, directed by Kasi Lemmons, falls into that category. Harriet weaves together facts about Harriet Tubman’s life into a compelling story, but some critics are not so enthusiastic about the film’s aesthetic qualities. In Harriet, there are no truly unusual composition of shots or camerawork the likes of 12 Years a Slave, and the physical horrors of slavery receive almost no screen time, leading some to wonder if audiences are sophisticated enough to fill in the gaps. The audience sees, for example, the scars of brutal beatings without any supporting dialogue. Thankfully, Lemmons resists the temptation to take an overly didactic or ‘preachy’ approach. Any aspects of slavery – and there are several – that the film does not cover can be dealt with as film preparation. It is unrealistic to believe that one film can show all there is to show about slavery. It’s not the focus of the film anyway. This is in, the words of its director, a “freedom film.”

Both of these so-called limitations that I’ve just mentioned, however, make the film accessible to audiences of all ages and backgrounds. They further make Harriet, rated PG-13, an excellent film to explore with EFL students in upper-secondary schools, especially since teachers are deeply concerned about the impact of media violence on young people. Let’s face it, some scenes in 12 Years a Slave, rated R, may overwhelm or traumatize teenagers. Before outlining further reasons for using the film in the (German) EFL classroom and providing some original teaching materials for this action-packed film, let’s preview the trailer and get a taste of the experience:

END_OF_DOCUMENT_TOKEN_TO_BE_REPLACED

Mere days after Joe Biden was sworn in as President of the United States, the new administration announced its intention to put Harriet Tubman – known as Moses – on the twenty-dollar bill. The currency redesign – a relatively common occurrence in the 19th century – was originally set for release in 2020 to mark the centennial of the 19th Amendment that granted women the right to vote. The majority of Americans supported the redesign in 2016 when the last poll on the issue was taken. President Donald Trump put the project on hold, citing security issues and attributing the Obama initiative to sheer political correctness. While Trump may still view Andrew Jackson as an American hero, historians are quick to point out the complexities of the former U.S. president’s biography. Jackson owned hundreds of slaves and was responsible for the Indian Removal Act that led to the death of about 4,000 Cherokees, forced to walk from the Southern states to modern-day Oklahoma on what is now referred to as the Trail of Tears. Even though he probably should be, Jackson will not be completely removed from the twenty-dollar bill – he’ll just be demoted to the back. The irony of placing Tubman on one side and Jackson on the other on a symbol of national identity has not gone unnoticed and certainly speaks to the division in American society today.